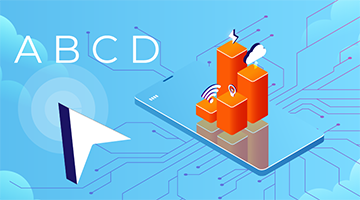 Variable Fonts currently doesn't have enough browser support but should be on our list of skills to learn. Variable Fonts are the progression of the Open Type font specification. One font file can contain multiple variations of the typeface. Using CSS, it is possible to access these variations and animate transitions between styles.

Custom cursors have spread since the famous old trail effects and are used as a novelty, often blending effects to modify the color and opacity of the cursor according to the elements they are overlapping. These “reactive cursors” change shape, size, opacity, color or animation in response to other elements or the actions of the user. The Organic motion is another common characteristic seen in the comeback of the cursor.

We can officially say that PWAs are the new standard, something like the new responsive web design, due to the advances that they represent. Mobile versions aren’t reduced versions, it’s a different experience which can and should be optimized to have good performance, indexation and conversions.

We can officially say that PWAs are the new standard, something like the new responsive web design, due to the advances that they represent. Mobile versions aren’t reduced versions, it’s a different experience which can and should be optimized to have good performance, indexation and conversions.

Progressive web apps allow developers and designers to create applications based on web technologies typical of native app-like experiences with the full screen and custom navigation bar, automatic updates, transitions between sections without loading other URLs, access icon in home screen as well as the ability to work offline and receive notifications.

But the best thing is that they keep the positive characteristics of web apps like SEO and indexation by search engines and, most importantly, avoid the effort of cloning the app with different technologies.

Design systems will continue their climb in popularity with more and more companies realizing the benefits of making every single digital manifestation of the brand scalable and cohesive. They are fundamental tools for the design team and allow communication between developers.

A Design System is a manifesto of all the aspects of the design, and the processes implied in the creation of new content reusing elements and iterating tasks. It deals with points like the writing style of the copy, voice and tone, motion, etc. Design systems are accompanied by style guides and a pattern or components library.

Pattern libraries collect all the elements of a graphical user interface (GUI), like buttons, form fields, alerts, the hover states of every element, etc.

The style guide collects all the uses of typography, weights and scales, margins, padding, grids, icons, and color palettes. These definitions include the CSS styles applied to each element, so that there is direct communication with front-endears and future changes are easier to make.

AI algorithms only need 100 likes to be as accurate as your mother in predicting your personality. Chinese artificial intelligence company Sense Time has been scanning and categorizing the population on a massive scale, they even managed to detain a delinquent at a concert thanks to a real-time facial recognition system. AI is already everywhere, so we really need to design for Privacy, Safety and transparency in all uses of artificial intelligence.

We have seen cases of Dark patterns in which we could be talking with a bot or have an AI assistant carrying out our personal tasks without realizing it. Big companies are patenting systems to optimize their returns from publicity, using our personal details in indiscriminate and unsafe ways, while bots are also being used to influence public opinion, by manipulating elections, etc.

The camera is the new search box, many applications will eventually introduce the search system that’s already found in Snapchat, Pinterest Lens, and Google Lens.

Snapchat, as an AR early adopter, wasn’t going to miss out on the visual search. In September 2018 it announced a new feature in a strategic collaboration with Amazon. This new Snapchat feature allows the user to “scan” barcodes using the camera. When the result is positive, additional product information is shown or “augmented” in the form of an Amazon card with other similar products and a purchase button.